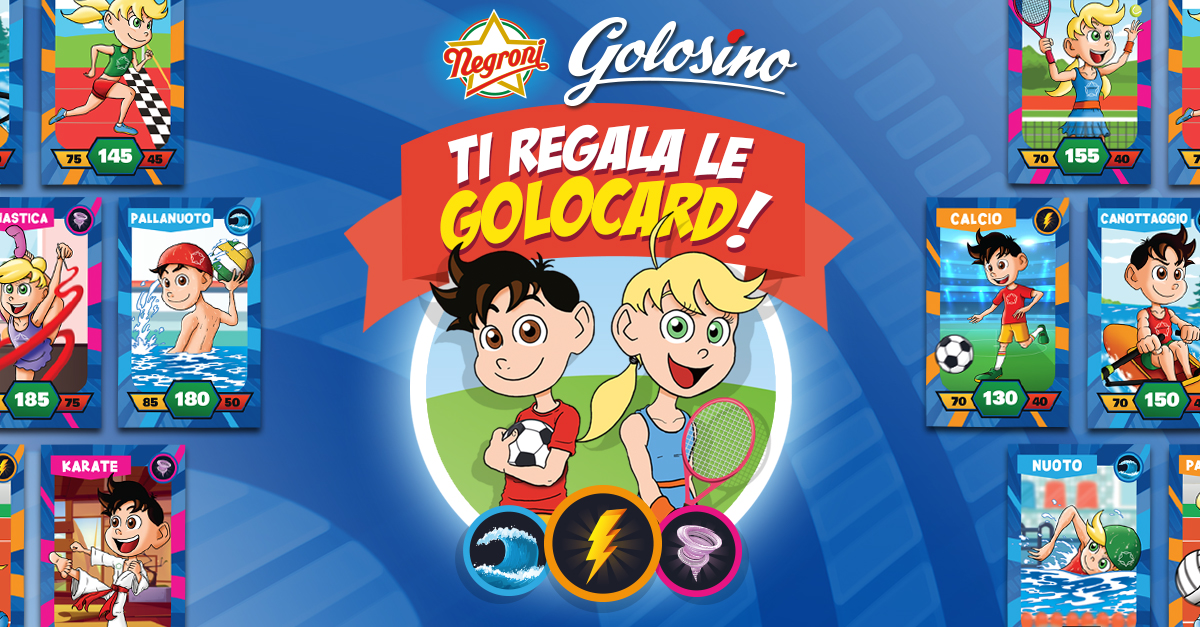 To engage and entertain young consumers in a different way than usual, Golosino offered a promotion that allowed everyone to play thanks to a free novelty included in the promoted product pack that combines educational aspects and entertainment.

The game, structured as a deck of collectible cards linked to the theme of sport, combines information on the various disciplines with games to play in company and online.

The cards allow children to challenge their friends in various game modes and give them access to online content and games via a QR code printed on each card.

The sports are represented by both male and female characters who bring the different cards to life in order to suit all tastes of the target audience.

By purchasing a Golosino Negroni multipack, each consumer gets a 3-card package of the promotion, enough cards to be able to play immediately.

The creativity of Golocard playing cards

One side of each card features a character representing a sport: tennis, football, water polo, gymnastics, volleyball, swimming, karate, athletics and rowing.

Each sport has been assigned one of the elements: lightning, wind or wave as well as a score in attack, defence and Golosino points.

Different ways to play and plenty of room for your imagination

The information on this side of the card allows children to challenge each other in three games based on challenges between the elements, on the basis of attack-defence scores or Golosino points, leaving room for children's imagination in creating new ways of playing.

Through the QR codes, children can access a dedicated minisite for each sport where they can find:

Promosfera designed the initiative, dreamt up the main characters and graphically created the cards, created a  website with the game instructions and a minisite for each card/sport with information and interactive games.

The graphics of the promotion and the Character Design

The graphics had to be  appealing and child-friendly with characters that conjured up the protagonists of a cartoon, smiling and positive, capable of capturing and winning over children.

For this reason, Promosfera involved its graphics department to work on a customised Character Design project.

To learn more, read CHARACTER DESIGN: creating a personality or a Character for your promotion.

How to get the most out of an Instagram contest

How to organise a Cashback