There are no magic tricks or mathematical rules that guarantee a successful draw or contest but there are various factors that, if properly combined, affect the result.

It seems trivial to reiterate the importance of communications but often promoters neglect this aspect, focusing exclusively on the organisational aspects of the draw or competition. Proper communications, in order to reach a wider audience, should use a range of different means and channels that include:

The mechanism of the draw or competition
In addition to the importance of communications, other factors to be carefully considered concern the mechanism and the prizes.
There is no single rule valid for everyone for the success of a draw or competition and often, even with a simple traditional mechanism, excellent results can be obtained where the promotion is appropriate for the target audience and properly supported.

It might be thought that the traditional draw or competition where consumers fill in a card, affix the stamps they have previously collected and go to post it is obsolete and unappealing. Experience shows us, however, that this is not the case and that this mechanism works very well if the prize is right for the target audience and if an appropriate communications plan has been prepared.

A good example of a success story, where a draw achieved optimal results when all these factors were combined in the right way, was the 'Zespri Summer Time’ draw. This draw highlighted excellent communications planning that made it possible to reach the target audience both in store, with targeted promotional activities, and online through the use of advertising banners and Facebook and Instagram.

In this draw both the awards and the double mechanism, instant win on the web and physical cards, allowed for engaging a very broad target audience. The younger and more dynamic audience was able to participate online in instant win mode motivated by prizes that, although of lower value, were still very attractive. Users in general however also participated in large numbers in traditional mode involving significant numbers with thousands of postcards received.

The choice of the prize, of course, is the other fundamental factor of a promotion and, in this case too, we believe it had a great weight in the success of the Zespri competition because, although there was only one prize, a trip for two people to San Francisco and Hawaii, it was strongly aspirational. 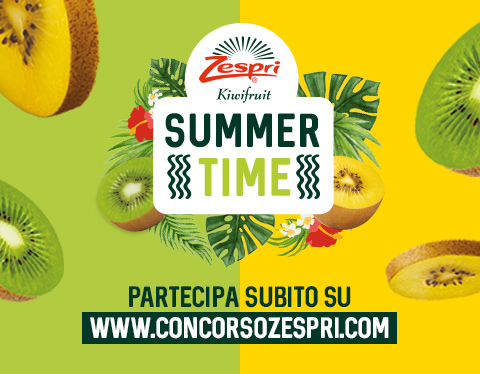 Participation in the draw was possible in two ways – traditional cards and instant win on the web.

Traditional card mode
In order to participate, users had to collect 7 stamps of the promoted products to be stuck on a card that they had to complete with their own data and send to the postal address for the draw.
The card could be found in the product packaging or directly on the draw website. A trip for two people to San Francisco and Hawaii was drawn from all the cards received.

Instant win on the web
In this mode, not tied to a purchase, consumers could participate by connecting to the draw site via an advergame. Regardless of the outcome of the game, the system identified 3 random winners each day. Prizes on offer included inflatable mattresses and Zespri-branded cooler bags.

How to organise a Cashback

Ideas and tips for creating your digital Advent Calendar